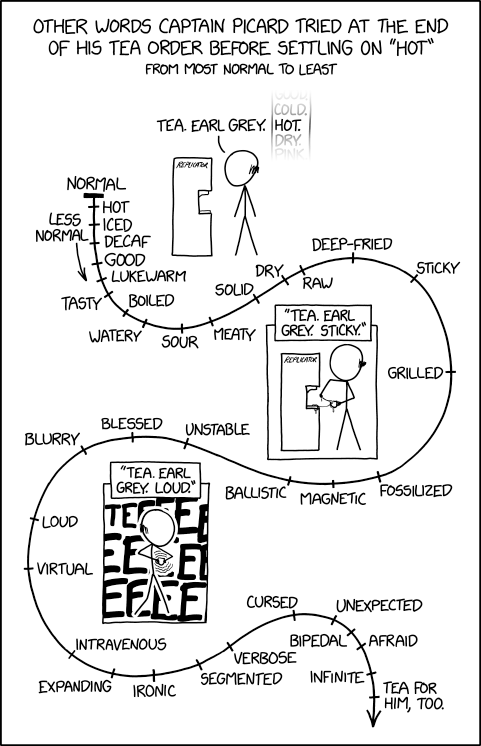 gordol
reply
At least one of those would need the assistance of Dr. Crusher.
Earth

CblackFeed42
reply
I wonder if you order the "Meaty" tea and leave it in a room, does it naturally become "Fossilized" tea?
Portland, OR.

astw56
Better enunciate, lest you end up with tea, Earl Grey, and meat tea.

Things I Am Actually Aging Like, Instead of a Fine Wine by Lana Schwartz, Karl Spurzem
Wednesday January 19th, 2022 at 5:32 PM

That three-dollar wine from Trader Joe’s: growing more acidic by the day.
Read the whole story

“He looked about as inconspicuous as a tarantula on a slice of angel food.”
“She looked almost as hard to get as a haircut.”
“The smell of old dust hung in the air as flat and stale as a football interview.”
“Her face fell apart like a bride’s pie crust.”
“This car sticks out like spats at an Iowa picnic.”
“I belonged in Idle Valley like a pearl onion on a banana split.”
“A few locks of dry white hair clung to his scalp, like wild flowers fighting for life on a bare rock.”
“Then she straightened the bills out on the desk and put one on top of the other and pushed them across. Very slowly, very sadly, as if she was drowning a favorite kitten.”

“If you use similes,” he once suggested, “try and make them both extravagant and original.”

I’ve been seeing a string of headlines over the past couple of weeks or so, reporting that NASA “hired” “theologians” or “priests” to “advise” the astrobiology program (which is one of my funders) on how to prepare for the discovery of alien life.

All of these stories are misleading at best, and mostly incorrect. The stories I first saw appeared in the U.K. press – not sure who published the first one, but subsequent stories were pretty much copy-cat journalism (if you could call it journalism).

By December 22, The Times of London – supposedly a respectable news outlet – ran a story with the ridiculous title, “Heavens above: NASA enlists priest to prepare for an alien discovery.” The story was written by Kaya Burgess, identified as a “science reporter and religious affairs correspondent.” She wrote, “a British priest has been helping Nasa to understand how the discovery of extraterrestrials would change the way we see the universe.” This is completely incorrect.

The British priest she is referring to is Andrew Davison, a member of the divinity faculty at the University of Cambridge. I do not know Dr. Davison, so I don’t mean to cast aspersions, but apparently he is trying to publicize a new book he has written, due out next year, Astrobiology and Christian Doctrine. Though I can’t tell for sure, I assume all these stories stem from Dr. Davison’s efforts to promote the book.

Before I quote more dumb headlines and incorrect copy, let me offer a few facts. In 2015, NASA approved a grant for the Center of Theological Inquiry (CTI) in Princeton, New Jersey, to conduct an inquiry into the societal impacts of the discovery of extraterrestrial life. According to CTI’s web page, “The Center of Theological Inquiry builds bridges of understanding by convening theologians, scientists, scholars, and policymakers to think together – and inform public thinking – on global concerns.” CTI chooses topics for year-long, multidisciplinary, residential studies. This year’s topic is the environment and climate change. CTI is not a religious institution and has no affiliation with any church.

CTI Director William Storrar said in a 2016 statement about the astrobiology inquiry, “This interdisciplinary team of theologians and scholars in the humanities and social sciences will pursue their inquiry in dialogue with leading astrobiologists and with support from the NASA Astrobiology Program.”

CTI crafted the questions to guide the astrobiology inquiry. It selected the scholars who would participate. Note that the inquiry involved “theologians and scholars in the humanities and social sciences” – not just theologians. No one at NASA had anything to do with these processes. As with any other NASA grant recipient, CTI was simply expected to do what it said it would do in its grant proposal. As far as I know, it did.

As I wrote in a blog post on June 9, 2016, “The grant to CTI was NOT for a study of the implications of a discovery of extraterrestrial life on religion – the project is intended to consider the implications of such a discovery on society, writ large. Yes, religions are a part of societies, but there is a difference. (Also, by the way, theology – the scholarly study of religion and religious thought – is not the same as religion.)”

The Cambridge divinity school reported in a blog post (undated, but presumably written in 2016), “Religious traditions would be an important feature in how humanity would work through any such confirmation of life elsewhere. Because of that, it features as part of NASA’s ongoing aim to support work on ‘the societal implications of astrobiology’, working with various partner organisations, including the Center of Theological Inquiry at Princeton. Andrew Davison, our Starbridge Lecturer in Theology and Natural Sciences, is in Princeton as a member of the Center this academic year, 2016-2017. His focus is on the consequences of astrobiology for Christian theology.” (The first year of the inquiry was 2015-2016, by the way.)

Okay. Now back to more dumb headlines and incorrect copy.

The Hill reported today, “NASA hires religious experts to predict how humans may react to aliens, theologian says. Two dozen theologians were hired by NASA, according to one religious scholar who says he was recruited.” Again, incorrect. NASA did not hire any religious experts. And Dr. Davison was not recruited by NASA. If anybody recruited him, it was CTI. Brooke Migdon wrote, “Davidson says in an upcoming book that a large number of people would seek religious guidance should aliens ever be discovered.” (By the way, Ms. Migdon, his name is Davison, not Davidson.)

The U.K.’s Daily Express reported, “NASA signs up British priest to prepare for alien life. ‘May discover it next week!’” This is what we can expect in Express headlines, I guess.

The New York Post reported Dec. 27, “NASA hired 24 theologians to study human reaction to aliens: new book.” Again, NASA did not hire any theologians. And participants in the CTI inquiry were not all theologians, as noted above (one was a neuroscientist, for pete’s sake).

The oh-so-reliable (NOT) Newsmax also repeated this story, reporting, “NASA Taps Theologians to Assess How Humans Will React if Life Found on Other Planets.” At least this story said, “NASA is reportedly hiring two dozen theologians to take part in a program at Princeton University to assess how humans will react if alien life is found on other planets.” The reports, however, are incorrect. And also CTI is not Princeton University. CTI happens to be in Princeton, New Jersey, but it has no affiliation with the university.

Okay, I‘ve had enough. You probably have, too. Though I’ve discussed these stories with some of my NASA astrobiology colleagues, no one asked me to write this post. I wrote it because this kind of sloppy journalism annoys the heck out of me. It amazes me to see how careless some journalists are about reporting without any fact-checking. Dr. Davison appears to be the source of all these stories. Maybe he’ll sell some books.

istoner
reply
Headlines like "NASA Hires 24 Theologians" have been flooding my news feed and driving me NUTS. Grateful to Dr. Billings for taking the time explain the journalistic malpractice these stories represent
Saint Paul, MN, USA